The Inflation Reduction Act recently passed by Congress is being touted as government working to reduce the rate of inflation that has spiked in 2021 and 2022. I’ll leave it to the politicians to go into the details of how this will or won’t help with bringing inflation down.

One of the benefits of this Act is that it will raise more funds than the expenditures it authorizes with the result that the national debt will be reduced over the course of the next ten years. Granted, the reduction is not huge, but it does help to chip away at the debt. But let’s take a look at what’s inside this document at some of these new sources of income as well as some expenditures and how they may affect you.

This section of the Act will allow Medicare to negotiate prices for drugs.  This should also have a trickle-down effect to drug prices even for those not on Medicare since Medicare represents a large portion of drug purchases.  The effect will be minimal to start with as it only includes a few drugs initially, but the number increases over time.  This may help with decreasing drug prices in general or at least limiting their increases to the rate of inflation.

The Affordable Care Act (ACA) has enabled an additional group of people to obtain health insurance, but subsidies to make the premiums affordable were limited to those who made less than 400% of the poverty level for their family size. The ACA also provides a means of purchasing health insurance even if you don’t qualify for any subsidies. This has particularly benefited small business owners, consultants, and others who don’t have an insurance option through an employer.

One drawback of the subsidies was that there was a “cliff” on the qualification for the subsidy. As soon as you earned $1 more than the cutoff level the subsidy went from a significant portion of the premium to zero subsidy.

In 2021, additional funds were made available so that this subsidy cliff became a gentle phase-out until income levels were at a much higher level. This was only for 2021 and 2022 and was set to expire at the end of this year so that this all-or-nothing cliff would come back into force. This new Act will extend that gentle phase-out for another three years. This will again make more people eligible for healthcare with reduced premiums.

It is common knowledge that the IRS is currently underfunded. This has been the cause of the delays in being able to process returns with some people not getting refunds until months later or sometimes not until the next year. In addition, because of the shortage of staff and technology, the IRS leaves a lot of money uncollected that it needs to go after and get. NPR reports that the IRS will miss about $600 billion of revenue just this year. The IRS is to get additional funding in this Act that will assist both with service backlogs as well as the ability to enforce collections.

Another source of revenue will be a new 15% corporate tax on businesses that have more than $1 billion dollars in income according to their financial statements. This is going to affect only the very largest companies such as Berkshire Hathaway; the large banks such as Chase, Bank of America, Wells-Fargo and Citicorp; large energy companies like ExxonMobile and Chevron; telecommunications companies like AT&T and Verizon; retail companies like Amazon and Walmart; tech companies like Apple, Alphabet (Google) and Microsoft. 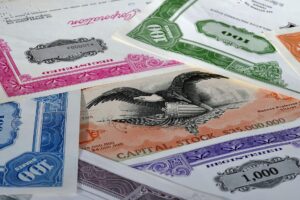 When companies make profits, they can do one or more of three things with the money. First, they can put it back into the company to increase their capacity and thus the ability to make products (resulting in more profits).

Second, they can give it back to shareholders in the form of a dividend. This is cash given to the shareholders, usually every 3 months. Shareholders benefit from this money as it becomes theirs to spend, save or reinvest.

It is this third option that the new Act will address. A company who spends its profits to buy shares of its own stock will have to start paying a 1% tax on that spending. This will likely incent companies to move from buying back stock, to paying a dividend. While Warren Buffet has said he prefers stock buybacks to dividends he does say that many companies tend to buy their stock back at higher values (because that’s when they have more profits to buy them with).

What this means is that after this Act goes into effect, it may be a good time to see how your investment portfolio is set up to see if any changes might be beneficial.