Smart people don’t make dumb mistakes with their money. Or do they? See how many of these traps you might be falling into.

Nearly all decisions about money are related to time. Spend more to save time, or pay less but do more yourself. One money saving idea is that if there is a gas station further away from your usual one that has gas for less money, then it is worth driving to get that savings. The mistake is thinking that there is always savings to do this.

While the total at the pump might be less, what was spent to get that savings? Perhaps another 15-minutes each way? What could have been done in that extra half hour instead? I suspect it was worth more than the savings received at the pump. Likewise, if we take the average cost per mile to drive a car of $0.585, it would take a savings of $0.58 for every mile further driven to make it worthwhile.

I’m Protected from Covid-19 So Estate Documents Can Wait

In early 2020, a number of people contacted estate attorneys to get their Wills and other documents created or updated. The fear-factor helped to jolt people into this as there was a possibility one might get Covid-19 and die. But now that vaccines and boosters are available, that urgency may have gone away.  This could be another money mistake. 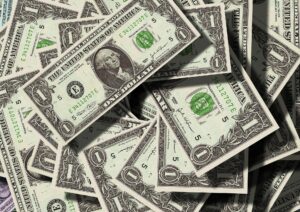 If you don’t have a Will, it will make life complicated for your loved ones and your assets may end up going to someone you don’t want to receive them. Rather than putting this off, since it is still early in the year, put a plan in place to contact an attorney and get those documents completed or updated. I know this is difficult because it means reconciling the fact that there is a 100% chance you’ll die. Instead, think of it as giving a gift to your loved ones so that they don’t need to deal with complicated processes at the very time they are sad that you are gone.

Then there is the situation where people are too nice to loved ones.

One might think that helping out someone get started by co-signing their loan would be a good idea. After all, they agreed to pay it back and they are responsible and will do that. But that could be a very costly money mistake.

But what happens if the person dies before the loan is paid off? You are stuck with it as the co-signer and you’ll need to pay it off with your money. I was told of a situation where an older person co-signed an education loan for a young person. Unfortunately, the young person died at age 42 without having paid all of the loan back. The co-signer had forgotten about doing this, and it was 3 months before they were notified of this loan that they now had to complete paying back. Not only that, but the missed payments were reported to the credit agencies and the older person’s credit score went down significantly.

Sure, the IRA has done well and there can be a temptation to take some of it out. However, if you are younger than 59 1/2 you’ll have to both pay taxes on the money you take out, as well as having a 10% penalty applied for taking it out early. For every $100 withdrawn, the actual amount after taxes and penalties may only be $60. I doubt whether most IRAs have gone up enough to pay for those taxes and penalties. The bottom line is that this isn’t a very good source of home improvement funds. It is often a money mistake to raid the IRA.

Another point to consider is that most people do not contribute enough to their IRAs to begin with, so with the market increase, that is just helping to dig out of that not-enough-for-retirement hole. You aren’t really as ahead as you think you are.

With interest rates still remarkably low, an option such as a home equity loan or a loan against existing assets may make more sense. A financial advisor can come up with alternatives to raiding the IRA account.

This seems like an ideal situation, right? Set up the bank account so that the credit card gets paid automatically each month. No late fees! No interest payments! All good!

While this is a great idea, it does not allow you to “autopay and forget.” It is still necessary to look at those statements each month and make sure that all the charges are legitimate. It’s also a good idea to review the real charges on a regular basis to see that you are getting the value out of that expense. See the blog entry on leaking money for ways to save on subscriptions that are being charged to credit cards.

I Don’t Mind Giving a Little Money to Some Charities

Having a charitable donation plan is fantastic! During the 2020-2022 period, a lot of charities have been struggling through this pandemic and they can always use your unexpected donation. But sending $25 or $50 or $100 back from that solicitation you got can have unintended ramifications.

I knew a person who was giving $50 or $100 to a number of charities and political solicitations. Before he knew it, this person was receiving up to 100 solicitation envelopes in the mail each month! Often, solicitations were received from the same organization asking for money more than once a month. Every charity was sharing the donor’s contact information with other organizations resulting in a cascade of requests. The worst offenders in this area were political organizations such as political parties and politicians. Giving to one incumbent candidate resulted in requests from at least five more campaigns!

Rather than just picking some solicitation that sounds worthy to respond to, identify the charities and organizations that you feel strongly about and create a documented list of who they are and how much should be given to each. This can be part of a spending budget, and just as one might do with spending in other categories, amounts can be limited to the total amount you want to give to charity.

It is also beneficial to check out these charities to see how much of donated money actually helps the organization and how much is being used for fund-raising work and for top-level salaries. That will help determine how to make the charitable dollar go further as well. Another way to help funds go further is to choose fewer charities and give higher amounts to those. Along with making that larger donation, include a note requesting that your contact information not be shared or sold.

So how did you do? Did you find yourself avoiding these money mistakes, or did you find some ways to improve your money skills?