When it comes to paying for your children’s university education, most parents want to help their children start off right by helping them with their student debt. This might be by co-signing a private loan, or taking out a Parent Plus loan.

One study showed that parents took on between $20,000 and $40,000 of student debt. Many of them dipped into retirement funds (and incurred early withdrawal penalties) to help pay this back. The result is parents at retirement age who not only have a smaller nest egg to retire on, but are on the hook for a lot of debt as well.

Why Pay Yourself First Works

Although it does not seem intuitive, the better solution is to pay yourself first (by investing it in your retirement fund) before you pay your children’s obligations. The reason is that through compounding of gains, your own account will grow faster over time which will provide you with more funds later to pay back loans than it will if you use the funds now. 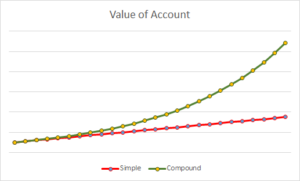 Let’s take a look at a graph of what compounding means. The horizontal is time and the vertical represents the total value of a theoretical account. The red line represents the simple interest, which means it is the same every year. Compounding means that the interest paid in the next year is based on the total of the year before, which is a higher number.

The key point is that if you notice the red line goes up faster the more time passes. That means if you wait longer before using some of it, it will be a higher number to start with. Here’s a specific example. 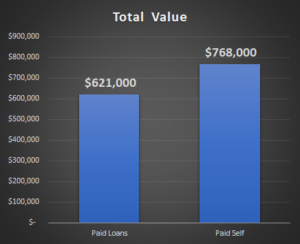 Alternatives to Taking on Major Debt for School

After graduation, when it is time to start paying back, perhaps help them with a percentage of the monthly payment and not all of it, and let your percentage decrease as the child earns more and is able to take on more of the total themselves. Also, keep in mind that some college loans can be forgiven after a period of payback, which is another reason to pay yourself first rather than the child’s obligations.

The bottom line is to pay yourself first and don’t let your children’s debt be your debt. Instead, wait until your nest egg has increased in value and then assist later in life, not earlier.